From the Desk of:

Front Office
Galaxy Nine
3 Light Years From Andromeda
Dearest You,
Wow.
I can’t believe you finally found your way here.
You see, I’m your biggest fan.
I’ve been watching you grow up from the time you were a tiny tot…

...cried and laughed with you at your challenges and triumphs…watched you learn to walk...learn to read...drive your first car…

...and yes, I’ve always been there with you, on the days you weren’t sure if you could get out of bed to face the day...even if you didn’t realize it :-)

I’ve always known you were meant to accomplish something big in this lifetime (more on that later) but first…
So good to really, truly see you.
I’ve been waiting SO so long to talk with you in person!
But, enough about you :-)
I should probably talk about ME for just a minute...since this might be a little confusing.
I am the Cosmos.
Yes, including all 200,001 billion galaxies…
It’s a bit hard to get your head around, maybe, just meeting me like this…and to be honest, it’s not that easy introducing myself and “what I do” in a nutshell.
I mean...
I’ve even done some of those workshops on “your elevator pitch” and all...like you know, who you are, what you specialize in, who you help, etc. etc…
But it STILL doesn’t help much with the introductions! Ha.
Soooo...the best thing I’ve been able to come up with in these type of situations is my Wikipedia Entry (funny right)???

is the universe. Cosmos is used at times when the universe is regarded as a complex and orderly system or entity; the opposite of chaos.[1] The cosmos, and our understanding of the reasons for its existence and significance are studied in cosmology, which is a very broad term covering any scientific, religious, or philosophical contemplation of the cosmos and its nature, or reasons for existing.
(Flammarion engraving, Paris 1888) 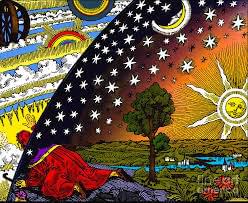 P.S. Remember, I can’t send you emails myself. So they will be coming from Ric & Liz (who know how to do such things, bless their hearts).

Make Sure The Cosmos Can Reach You...